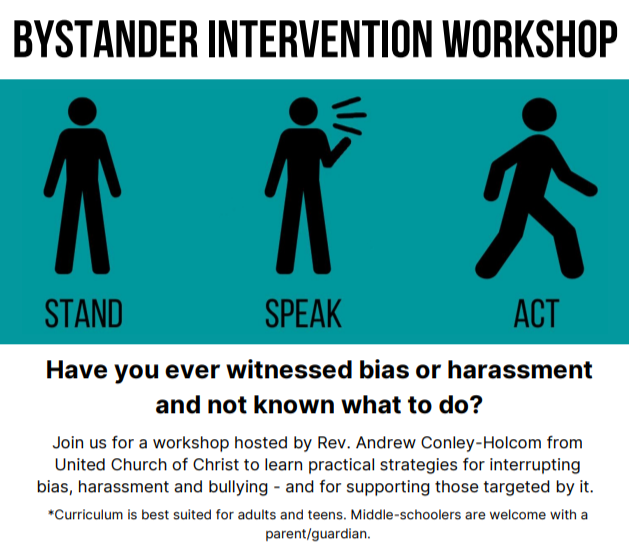 This workshop is a ministry of Admiral Church UCC and is rooted in Theatre of the Oppressed (TO), which utilizes theatre games to explore, disrupt, and reformulate power relationships. It is especially useful for Bystander Intervention preparation because it "tries out" various intervention strategies and allows for group processing, reflection, and analysis of both practical outcomes and emotional consequences. TO is inherently uncomfortable, because it plays with oppressive dynamics, and is profoundly liberatory, because it invites the gathered body to find solutions from within. Join one of our two small groups as we journey through the stories of prominent women in the Hebrew Scriptures from a progressive Christian lens.

books available via link below

Women make up over one-half of the world’s population, yet throughout history women have been kept out of power; they have been oppressed and disregarded and have often had their stories ignored. This is a tragedy not only for women but for all humankind, because we all have much to gain by hearing one another’s stories, and by experiencing one another in all of our rich fullness – not from a preconceived notion that one group or sex is superior to another.

This is important to note at the beginning, because history has largely been told by men. In particular, the stories we have preserved from ancient times tell things from a male perspective, and often ignore women. Thus, we often need to read between the lines and behind the words to really hear the stories of the women who played such a significant role in the events described in the biblical stories, and by extension, in our tradition.

The sessions in this study will invite you to explore the stories of some amazing biblical women, to get to know them and to learn from them. How might we live our lives in response to that?